Last month, ROR Comedy Club underwent its final bit of refurbishment, with a gorgeous new floor and a fresh lick of paint. This put the finishing touches on Japan’s only dedicated stand up comedy club (and one of just a handful in Asia). The club now has two shows every week, a thriving open mic scene and regular international headliners, but things were very different when ROR started back in 2011.

ROR Comedy lived a nomadic existence for the first few years, alternating between different venues, including Tin’s Hall, Cafe Absinthe, and “Suite”, the bar that would eventually become ROR Comedy Club. Here are some photos of the club in its earliest days:

The first addition that ROR made to the space was adding a ROR Comedy banner. As you can see, it didn’t exactly transform the venue, but it at least established our brand:

About two years ago, we finally added a stage and curtains and got some much-needed stage lights, which added a lot more atmosphere and polish. While far from perfect, this was definitely a step in the right direction:

Just over a year ago we made the decision to move the stage to another part of the room, meaning we finally had a backstage area. It wasn’t pretty, but it was functionally much better:

With that done we decided to embark on our biggest refurbishment yet. We re-papered the walls with the iconic brickwork theme. Then we built new walls by the stage area and installed a brand new, much larger stage area. Finally, we added a large sign and neon-effect LEDs to complete the look:

The only remaining weak link was the floor, so a few days of work and a lot of cement and linoleum later, here’s the new-look club:

From a one-off night in someone else’s bar to a stand alone sleek comedy club, ROR Comedy Club has been getting more and more local and international attention. The environment draws both travellers and local expats to seek out this lively spot. Whether you’ve watched the venue grow to it’s current glory or you’ve never been to a comedy club in your life, walking down the stairs into this venue sets the stage for a night of laughs. We hope to see you soon, to book tickets for your visit to ROR, click here. 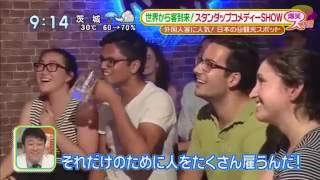